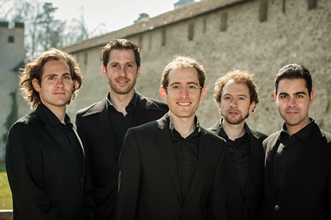 Shaar Hashomayim hosts the superb vocal ensemble Profeti della Quinta, renowned around the world for their vivid and expressive performances of music from the 16th and early 17th centuries. Founded in the Galilee region of Israel by bass singer and harpsichordist Elam Rotem, Profeti della Quinta is now based in Basel, Switzerland, and regularly tours throughout Europe and Israel. In reviewing their American debut this year, New York Classical Review declared that “they conveyed the meaning of the poetry with their diction, intention, and phrasing, commanding constant attention with their passionate and emotional music-making,” with The Los Angeles Times calling their singing “indescribably beautiful.”

The concert on Monday, October 20 at 7:30pm at Shaar Hashomayim will feature the music of Salomone Rossi (c.1570-c.1630), known as “The Jew of Mantua.” The programme portrays Rossi’s many-faceted art as a court composer in the service of the Gonzaga family and as a unique innovator of devotional music for the synagogue, by presenting a selection of his Italian madrigals, instrumental pieces, and Hebrew prayers.

Profeti della Quinta was featured in the 2012 documentary Hebreo: The Search For Salomone Rossi, by Joseph Rochlitz, which will be screened as part of the evening’s program. Filmed in Mantua, the 45-minute documentary traces how, at the height of the Italian Renaissance and Mantua’s splendour, a young Jewish violinist named Salomone Rossi burst through the barriers of discrimination and became one of the most fashionable composers and performers at the court.  Rossi brought about a revolution in Jewish culture when he published the first collection ever of originally-composed music for Hebrew prayers.

The ensemble’s recording of music by Rossi, Il Mantovano Hebreo for LINN Records, has been widely acclaimed. Early Music Today praised “the variety of vocal colours the ensemble finds: one’s revelling in the smooth sheen of its homophonic sound,” commenting that the recording “provides further evidence of both the quality and the variety of Rossi’s music.” International Record Review said: “Tantalizing as the music and the composer may be, the most tantalizing thing about this disc is, for me, the appearance of an entirely new and original Early Music ensemble … Profeti della Quinta.”

Profeti della Quinta is comprised of Doron Schleifer and David Feldman (countertenor); Lior Leibovici and Dan Dunkelblum (tenor); Elam Rotem (bass, harpsichord, and musical direction); and Ori Harmelin (chitarrone, a type of lute). Winners of the York Early Music Young Artists Competition in 2011, the ensemble has since performed regularly in prestigious music festivals and venues such as the Oude Muziek Festival Utrecht (the Netherlands), St. Michel en Thierarche Baroque music Festival (France), Musikfestpiele Potsdam (Germany) and many more. This season, Profeti della Quinta will be heard in Canada, the USA, Japan, Switzerland, Germany, Austria, France and the Netherlands.  The ensemble’s concerts have been broadcast live by radio channels including BBC3, France Musique, Switzerland DRS2, Israel’s Voice of Music and many others.

Established in 1846 and the oldest and largest traditional Ashkenazic congregation in Canada, Shaar Hashomayim, now under the musical direction of Roï Azoulay, preserves a musical tradition that stretches back to the great synagogues of the major capitals of the Old World.