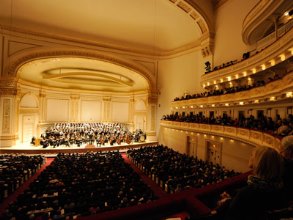 Giuseppe Verdi first wrote his famous Libera me (Deliver me) after the death of operatic great Gioacchino Rossini, and was inspired to complete his Requiem following the death of his personal hero, poet Alessandro Manzoni. The work met with tremendous success when it was debuted in May 1874 – first very reverently at the cathedral of Saint Mark in Milan, then at La Scala opera house. The music of the Requiem is characterized by wild undulations – from sparse, otherworldly vocals to brass-heavy brimstone and fire, and back again. Throughout, Verdi uses the terrifying theme of the Dies irae (Day of Wrath) to remind the listener of his inevitable mortality and judgment. The work’s far-reaching spiritual and emotional magnitude has been met with tremendous longevity and popularity over the last 140 years.

An acclaimed conductor, educator and lecturer, JONATHAN GRIFFITH has led performances across North America, South America, Europe, and Asia. Griffith is the 2014 winner of The American Prize in Conducting, in the professional orchestra division. The American Prize is a series of new, non-profit competitions designed to recognize and reward the best performing artists, ensembles and composers in the United States. In naming Griffith as its winner, the American Prize judges specifically noted his “energetic” and “committed” performances. Jonathan Griffith is co-founder and artistic director of DCINY which has brought together, under Griffith’s artistic leadership, thousands of musicians and choral singers in concert at prestigious venues across the United States, including Carnegie Hall, Lincoln Center, and Disney Hall.

Soprano Penelope Shumate last appeared with DCINY as soprano soloist for Messiah … Refreshed!, when The New York Times said she “sang the soprano solos with appealing bell-like clarity and surpassing sweetness.” Recently she has performed as soloist with the Santa Fe Symphony Orchestra, the Chamber Orchestra of Philadelphia, Rapides Symphony Orchestra, and Oklahoma City Philharmonic, among others, and with opera companies including Baltimore Opera, Opera Company of Philadelphia, Opera Saratoga, and Utah Festival Opera.

Mexican mezzo-soprano Claudia Chapa recently made a return appearance with Houston’s Opera in the Heights as The Witch in Hansel und Gretel, and was soloist in Verdi’s Requiem with Gulf Coast Symphony. She returns this season to The Glimmerglass Festival as Third Lady in The Magic Flute. Other recent roles include Dame Quickly in Falstaff for Opera St. Louis, and Azucena in Verdi’s Il Trovatore for Opera in Williamsburg. On a concert soloist, Ms. Chapa’s has performed Handel’s Messiah, Mozart’s Requiem, and De Falla’s El Amor Brujo.

Tenor John Pickle recently made his debut with Los Angeles Opera as Erik in Der fliegende Holländer, a role which he has performed to great acclaim with Lyric Opera of Kansas City, Utah Festival Opera and Michigan Opera Theatre. Additional roles include Cavaradossi in Tosca, Pinkerton in Madama Butterfly, Don José in Carmen, and Radamés in Aïda. In concert, his appearances include Mahler’s 8th Symphony with Houston Symphony, Verdi’s Requiem with the Mississippi Symphony Orchestra, and Beethoven’s Ninth Symphony with the Lima Symphony. He made his Carnegie Hall debut in 2008 with Schubert’s Mass in G Major and the Mozart Requiem conducted by John Rutter. Mr. Pickle can be heard on several operetta recordings for the Albany Records and Newport Classic labels.

Baritone Christopher Job returns to The Metropolitan Opera this season to sing The Flemish Deputy in Don Carlo and for Macbeth. He will also sing Ashby in La fanciulla del West for Des Moines Metro Opera, and appears in The Manchurian Candidate at Minnesota Opera. Recent notable roles include his Italian debut at the Teatro Comunale di Bologna as Sparafucile in Rigoletto and Il Podestà in Rossini’s La gazza ladra; Escamillo in Carmen with Lyric Opera Virginia; and Alidoro in La Cenerentola with the Festival Lyrique de Belle-Île-en-Mer in France. Job has appeared in numerous Metropolitan Opera productions including Janáček’s From the House of the Dead, and Shostakovich’s The Nose. Mr. Job’s concert appearances include My Fair Lady with the New York Philharmonic, sharing the stage with Kelsey Grammer and Brian Dennehy; soloist in Mozart’s Requiem at Carnegie Hall; Verdi’s Requiem with the Denver Opera Company; and Handel’s Messiah with DCINY.

Distinguished Concerts International New York Founded by Iris Derke (general director) and Jonathan Griffith (artistic director and principal conductor) Distinguished Concerts International is driven by passion, innovative vision, a total belief in its artists, and unwavering commitment to bringing forth unforgettable audience experiences. DCINY is a creative producing entity with unmatched integrity that is a talent incubator, a star-maker, and a presenter of broadly accessible, world-class musical entertainment. For more information about upcoming DCINY musical events around the world, please visit: www.DCINY.org.