Music by Schubert, Schoenberg, and the World Premiere of Alcyone by Douglas Boyce 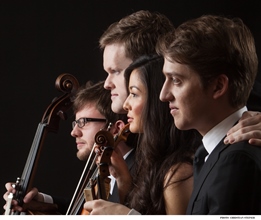 Praised by the Baltimore Sun for combining “smoothly meshed technique with a sense of spontaneity and discovery,” the Aeolus Quartet is one of the brightest and most versatile young string quartets on the scene today, committed to presenting time-seasoned masterworks and cutting-edge compositions with equal freshness, dedication, and fervor. The summation of the quartet’s two-year term as Graduate String Quartet in Residence at the Juilliard School is the concert Death and Transfiguration, the Lisa Arnhold Memorial Recital on Monday, May 4, 2015 at 8:00pm at Alice Tully Hall. The program features Schubert’s Death and the Maiden; Schoenberg’s string sextet Verklärte Nacht, with guest appearances from Juilliard String Quartet cellist Joel Krosnick and violist Samuel Rhodes; and the world premiere of Alcyone by Douglas Boyce, commissioned by the quartet.

The Aeolus Quartet is comprised of violinists Nicholas Tavani and Rachel Shapiro, violist Gregory Luce, and cellist Alan Richardson. Since coming together at the Cleveland Institute of Music in 2008, the Aeolus Quartet has been a prizewinner at nearly every major competition in the United States and has performed around the world. They have released two critically acclaimed albums of classical and contemporary works on the Longhorn/Naxos label.

The quartet approached composer Douglas Boyce, associate professor of music and department chair at George Washington University, to create a new work for this recital. Taking inspiration from the quartet’s name Aeolus, the Greek god who governed the four winds, Boyce turned to the mythical figure of Alcyone – Aeolus’ daughter – who transforms into a kingfisher, as told in Ovid’s Metamorphoses. Incorporating several short movements derived from scenes and images from the Alcyone myth, the quartet will occupy several arrangements in the performance space, setting an array of dramatic and sonic tableaux for aspects of the myth: lovers separated, spectral visitation, the reuniting and transformation of self, and the inescapable distances of memory and time.

Complementing this theme of transformation, the Aeolus Quartet performs Schubert’s testament to death, his String Quartet No. 14 in D minor, known as Death and the Maiden, from the composer’s own 1817 song which forms the theme of the second movement. The third major work making up the program is another pillar of the chamber music repertory: Schoenberg’s Verklärte Nacht (Transfigured Night). The string sextet in one movement from 1899 is based on a poem by Richard Dehmel which describes a man and woman walking through a dark forest on a moonlit night, and the woman’s revelation of a dark secret. For this powerful work, the Aeolus is joined by two superb artists and mentors, from the Juilliard String Quartet: cellist Joel Krosnick and violist Samuel Rhodes.

In recent months the Aeolus Quartet has traversed the globe – including a residency in Abu Dhabi in affiliation with Khalifa University and Chamber Music Abu Dhabi, and as featured ensemble in residence at the Jeju Island Music Festival in South Korea. Upcoming dates include New York’s Bargemusic and the OK Mozart festival, including a recital with pianist Jon Kimura Parker, in June; and the Bay Chamber Music Summer Series and Maine’s Kneisel Hall Chamber Music Festival in July. The Aeolus Quartet is also widely recognized for their highly innovative and engaging outreach programs and was awarded the 2013 Educator Award by The Fischoff National Chamber Music Association.