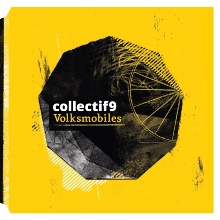 Montreal’s cutting-edge classical string band collectif9 has been gathering steam since its 2011 debut, attracting diverse audiences in clubs, outdoor festivals, and concert halls across Quebec and beyond. Featuring both original scores and new arrangements – often with lights, staging, and amplification more commonly seen at rock acts – collectif9 heralds a new age in genre-bending classical performance. Now, following an 18-date summer/fall tour where they performed for as many as 4,000 people, as well as the band’s first international tour in China in December, collectif9 releases its first album, Volksmobiles. Featuring folk-inspired music by Brahms, Bartók, Schnittke, and André Gagnon, the new album presents the world premiere recording of Canadian composer Geof Holbrook’s Volksmobiles, written for the ensemble.

The nine musicians and friends met as students at Université de Montréal and McGill University. In choosing the music for their young ensemble, bass player and lead arranger Thibault Bertin-Maghit aims to keep the pieces relatable to their peers, “I always look to works that have influenced non-classical musicians, focusing on classical music that also connects to pop culture, to give it a context in our own world.” As a nine-piece band, collectif9 balances “the power of an orchestra with the crispness of a chamber music group,” says cellist Andrea Stewart, “there is a lot of room for musical expression.”

The ensemble’s debut recording captures the brilliant colour and driving energy of a collectif9 live performance. It opens with Brahms’ Rondo alla zingarese, one of the group’s most frequently performed pieces and the subject of their first Live Short video. Bartók’s Divertimento for Strings (also on video here) is a condensed version of the composer’s original, performed at lightning speed. The Sonata allegretto from Alfred Schnittke’s 1st Violin Sonata transports in another intense and vivid arrangement by Bertin-Maghit. The Montreal group also performs a rousing version of the Quebec classic by André Gagnon, the Petit concerto written in honour of the Québécois fiddler Jean Carignan.

Canadian composer Geof Holbrook’s three-movement Volksmobiles captures a folk style tailored to what the composer calls collectif9’s “unique jubilance.” The work is specifically written for nine equal roles and is also intended to be performed with amplification. The work’s 3rd movement transforms the nine string musicians into a percussion ensemble, striking the bodies of their instruments in an intense and exhilarating performance.

collectif9 will officially launch Volksmobiles on February 19 at Théâtre Outremont in Montreal, and will also be presented by Music Toronto at the Jane Mallett Theatre on March 10. For complete 2016 tour dates including Lennoxville, Rimouski, and Victoriaville QC, Fredericton, NB, and St. Catherines, ON, see: Upcoming Shows

Shira Gilbert PR, Inc.
Copyright © 2021 All Rights Reserved
Designed by Maestra
Using iThemes | WordPress
Do NOT follow this link or you will be banned from the site!