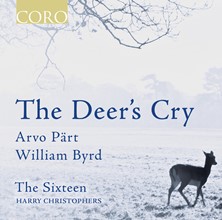 “The Sixteen are reclaiming the repertoire with their signature full-bloom sound, exchanging asceticism for generosity and warmth … an essential addition.”

Harry Christophers and The Sixteen present a striking new recording, featuring music by two composers – both masters of sacred music – born four centuries apart: William Byrd (c.1539/40 – 1623) and Arvo Pärt (b. 1935). This program features six of William Byrd’s works from the Cantiones Sacrae, including the monumental Tribue, Domine, and the mighty eight-voice motet Ad Dominum cum tribularer, as well as works by Thomas Tallis, including Miserere nostri, which is now believed to have been written in collaboration with Byrd. The three works by Pärt speak in his unmistakable voice, with its unique blend of ancient and modern, and include his mesmerizing Nunc dimittis which is crafted in his bell-like “tintinnabuli” style. The new recording on The Sixteen’s CORO label is available this month from Allegro Classical.

This year, The Sixteen is presenting The Deer’s Cry program in 33 towns and cities across the UK.  The Observer called the program “irresistible,” noting the music’s “simplicity and intensity, perfectly suited to the blended sound of the Sixteen.” AllMusic Guide says, “The popular choral group the Sixteen has never sounded better than on this release … it’s fascinating to hear the musical results of this experience even with more than four centuries separating the works of the two composers.”

Over one hundred recordings reflect The Sixteen’s quality in a range of work spanning the music of 500 years. Recent releases for the CORO label include Poetry in Music, which The New York Times called “beautiful and brilliant”; the 6th volume of the ensemble’s acclaimed Palestrina series; and the Grammy-nominated Monteverdi: Vespers Of 1610.