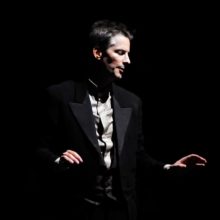 The Czech National Symphony Orchestra (CNSO) announced today that Steven Mercurio will become its new Music Director as of the upcoming 2019/20 season. Maestro Mercurio, an American conductor and composer known for his exceptional versatility and dynamism, has fostered a vibrant, ten-year affiliation with the orchestra, with extensive collaborations taking place across multiple musical genres and in every capacity: symphonically, operatically, and through extensive recording projects. Maestro Mercurio is currently in Prague, conducting the orchestra in music by Martinu and Shostakovich.

The Czech National Symphony Orchestra is self-governed and Maestro Mercurio’s appointment is at the behest of the musicians themselves. Jan Hasenöhrl, the orchestra’s artistic director said: “After many years of wonderful collaborations, we are very much looking forward to having Maestro Mercurio with us as our Music Director. His musicianship, energy, and versatility make him the ideal conductor for the future of the CNSO.” Mercurio succeeds Maestro Libor Pešek, who had held the position since 2007.

Maestro Steven Mercurio, who conducted the orchestra on a US tour last month, comments: “It is a great honor to be chosen by these wonderful musicians. They are open, flexible, curious and always interested in creating a magnificent musical product. I’m looking forward to an exciting future together.”

In addition to the concert season at the celebrated and historic Smetana Hall, which includes a seasonal Proms concert, the orchestra frequently tours and records. For his inaugural season as Music Director, Maestro Mercurio will conduct concerts in Prague in September, January and March, with repertoire including Mahler’s Symphony No. 1 “The Titan”, Dvořák’s Symphony No. 9, “From the New World.” He will also lead the orchestra on a tour of the United Kingdom in October.

Maestro Mercurio’s recordings with the Czech National Symphony Orchestra include Strauss’ Metamorphosen and Tod und Verklärung for Vanguard Classics; New Jewish Music for Analekta; and his own A Grateful Tail, a symphony inspired by dogs and the role they play in humans’ lives, which was premiered by the CNSO with the participation of Academy Award-winning actor F. Murray Abraham. Coming soon on the CNSO’s own label is an all-strings recording featuring Dvořák’s Serenade for Strings, Vaughan-Williams’ Fantasia on a Theme by Thomas Tallis, Samuel Barber’s Adagio for Strings, and Mercurio’s Eulogy.

Conductor and composer Steven Mercurio is renowned for his musical versatility, which encompasses the symphonic and operatic worlds and beyond. After receiving his Master’s degree from the Juilliard School, he became Music Director of the Spoleto Festival for five years, then Principal Conductor of the Opera Company of Philadelphia. He has since conducted more than forty-five operas in seven different languages, with engagements including the Teatro dell’Opera in Rome, Théâtre de la Monnaie in Brussels, the English National Opera, and many others, including numerous American opera companies. He has led symphony orchestras around the globe, from the London Philharmonic and the Vienna Symphony Orchestra to the Sydney Symphony Orchestra, to name a few. Audiences for Maestro Mercurio’s opera and symphonic telecasts have numbered in the millions, including the “Christmas in Vienna” series, recorded for Sony Classical, highlighted by the 1999 “The Three Tenors” concert. He conducted the now-classic PBS special “American Dream–Andrea Bocelli’s Statue of Liberty concert” with the New Jersey Symphony Orchestra. Maestro Mercurio also led the worldwide tour of Sting’s “Symphonicities” with the Royal Philharmonic Orchestra, culminating in the Deutsche Grammophon DVD “Live in Berlin.”

Additional recordings by Maestro Mercurio include “Il Trovatore,” “Pagliacci,” and “Cavalleria Rusticana” for Decca; “Verdi Arias” with soprano Daniela Dessi; three albums with tenor Marcello Giordani; and a recording of his own songs, “Many Voices,” with the Prague Philharmonia for Sony Classics,  in addition to collaborations with such artists as Wynton Marsalis, Mark O’Connor, and Chick Corea. A versatile composer, Mercurio’s major works include “For Lost Loved Ones,” premiered by Zubin Mehta and the New York Philharmonic;  and his “Mercurial Overture,” premiered by the Oslo Philharmonic in a concert telecast honoring the Nobel Peace Prize laureates, with Mercurio conducting. Maestro Mercurio is also a sought-after collaborator for many award winning recordings, arrangements and film projects.

In addition to his collaborations with the CNSO, Maestro Mercurio’s upcoming performances include the Israeli premiere of  Mieczysław Weinberg’s 1968 opera The Passenger for The Israel Opera, and several major concerts with Andrea Bocelli.