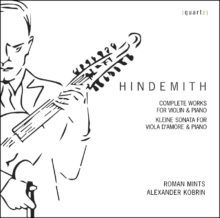 Possessing a passion for the avant-garde and an extraordinary creative energy, Roman Mints is considered one of the most original musicians of his generation. The acclaimed Russian violinist is joined by Van Cliburn International Piano Competition winner Alexander Kobrin for a new recording of Hindemith’s Complete Works for Violin and Piano, available from Quartz Music on April 5, 2019.

A longtime champion of of contemporary composers, Roman Mints’s deep appreciation for the works of Paul Hindemith began when he was a young violinist, studying in Moscow in the 1980s: “This music, written not just before I was born but closer to the time of my grandparents’ birth, felt completely contemporary, and daringly advanced in its sound … From the time I put Sonata in D on the stand, I was gripped by the first subject, constructed from seconds and sevenths, marked to be played with stony defiance. I was never the same again and Hindemith became my window into contemporary music.”

First and foremost a violinist and a violist himself, Hindemith’s four violin sonatas span the composer’s lifetime, offering an overview of his stylistic influences, from the German Late Romantics to polytonality and atonality, to his own eclectic, personal style intergrating Baroque and Classical elements. Also included in this survey are the the Kleine Sonata for viola d’amore and piano and Trauermusik, written in just one day in honor of the death of King George. Reflecting upon this new recording with Alexander Korbin, Mints said, “We had drawn the portrait of a man whose wildness hid a tender side, whose severity concealed humour, and behind whose crustiness there lay a capacity for ecstasy. I began to understand how he had resonated with me as a 13-year-old, and why he continues to hold a special place in my heart.”

Most recently for Quartz Music, Roman Mints released an album of music by the contemporary Russian composer Leonid Desyatnikov, which received a 5-star review in BBC Music Magazine and Audiophile Audition called “some of the most interesting music you’ve never heard of.” Also for Quartz Music, Roman Mints released an album of works for violin and piano by Alfred Schnittke, which the San Francisco Chronicle called “a thrilling reminder of the eloquence this composer … superb performances from Mints and [Katya] Apekisheva.” The New York Times called his previous release, Dance of Shadows, an innovative program of music by Ysaÿe, Piazzolla, and Schnittke, as well as a premiere by Dobrinka Tabakova “fascinating and technically brilliant,” while Strings Magazine called the recital “a thing of haunting beauty and magic.”

ROMAN MINTS was born in Moscow and began playing the violin at the age of five. In 1994, Mints won a Foundation Scholarship to the Royal College of Music in London and also studied at the Guildhall School of Music and Drama, winning prizes at each, alongside contemporaries Dobrinka Tabakova, Elena Langer, Maxim Rysanov, and Kristina Blaumane. Along with championing the work of Leonid Desyatnikov, Mints has given the Russian premieres of works by Golijov, Tavener, MacMillan, Mozetich and world premieres of over fifty works including compositions from Tabakova, Bennett, Langer, Finnissy, Irvine and others. He has worked alongside conductors Andrew Davis, Saulius Sondeckis, Vladimir Ziva, Vladimir Ponkin, and Philipp Chizhevsky, amongst others. Mints has performed with such prominent groups as London Mozart Players, London Chamber Orchestra, Lithuanian Chamber Orchestra, Musica Viva Orchestra, Russian Philharmonia, Kremerata Baltica, Prague Soloists and Prague Sinfonia. In 1998, alongside oboist Dmitry Bulgakov, he founded the Homecoming Chamber Music Festival which takes place annually in Moscow. Mints’s previous recordings also include the Grammy-nominated String Paths for ECM, and releases for the Black Box and Harmonia Mundi labels.  Roman Mints plays a Francesco Ruggieri violin, circa 1685.

Pianist ALEXANDER KOBRIN’s prize-winning performances have been praised for their brilliant technique, musicality and emotional engagement with the audience. In 2005, Alexander Kobrin was awarded the Nancy Lee and Perry R. Bass Gold Medal at the Twelfth Van Cliburn International Piano Competition in Fort Worth. His numerous successes in competitions also include top prizes at the Busoni, Hamamatsu, and Scottish International Piano Competitions. Kobrin has performed with many of the world’s great orchestras including the New York Philharmonic, Tokyo Philharmonic, Russian National Orchestra, Belgrade Philharmonic, English Chamber Orchestra, Orchestra Verdi, Orchestre de la Suisse Romande, among many others, with conductors including Mikhail Pletnev, Mikhail Jurovsky, James Conlon, Vassiliy Petrenko and Yuri Bashmet. His piano recitals have been heard in major halls worldwide, including Avery Fisher Hall in New York, the Kennedy Centre in Washington, the Albert Hall and Wigmore Hall in London, Louvre Auditorium, the Great Hall of the Moscow Conservatoire, Sala Verdi in Milan, and annual concert tours in Japan, China and Taiwan. His recordings can be heard on the Harmonia Mundi, Quartz, and Centaur labels.