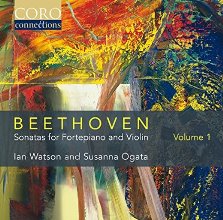 CORO is proud to introduce CORO Connections, a new series from the award-winning London-based CORO record label. All of the artists on CORO Connections have links to Harry Christophers, The Sixteen, and Handel and Haydn Society. The first artists to be featured on the new series are violinist Susanna Ogata and pianist Ian Watson. This first of four volumes of the Beethoven Sonatas for Fortepiano and Violin features Beethoven’s Fourth Sonata, Op. 23 in A minor, as well as the revolutionary ‘Kreutzer’ Sonata, his ninth, Op. 47 in A major – a blazing landmark in violin virtuosity and classical music repertoire. The new recording (COR16138) is available this month from Allegro Classical.

In these tremendous works, the artists use period instruments for which the music was originally written. Watson and Ogata reveal not only the clarity of Beethoven’s extraordinary musical structure, but also an amazing palette of colors. In doing so, this duo aims to recreate the white-hot intensity of the moment these striking sonatas were written and first performed.

Praised for her musical “sensitivity and fire” (Boston Musical Intelligencer), violinist Susanna Ogata is dedicated to exploring music on historical instruments. She was recently appointed as Assistant Concertmaster of the Handel and Haydn Society orchestra, conducted by Harry Christophers.

Ian Watson has been described by The Times in London as a keyboard performer with “virtuosic panache and brilliantly articulated playing.” He was appointed Resident Conductor of Boston’s Handel and Haydn Society 2014.