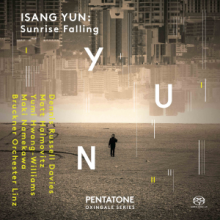 From a life wrought with struggle and torture, comes extraordinary music of stunning virtuosity and raw emotional power.

Uncompromising in his life as he was in his music, Korean composer Isang Yun(1917–95)held fast to his dream of a united people, even as he was unjustly accused of espionage for North Korea and sentenced to imprisonment and death. From this life of unimaginable oppression and torture emerges music of raw emotional power, now heard onISANG YUN: Sunrise Falling, a centennial commemoration of Yun’s life and music from the PENTATONE Oxingale Series. Maestro Dennis Russell Davies, a longtime collaborator and advocate for Yun, curates the program and conducts the Bruckner Orchester Linz, with remarkable, searing solo performances from cellist Matt Haimovitz, violinist Yumi Hwang-Williams, and pianist Maki Namekawa. Called an “important, courageous release” by Deutschlandfunk Kultur,this is the first in a new series of composer portraits from the PENTATONE Oxingale series. ISANG YUN: Sunrise Falling is available for digital download and streaming starting today with the CD release to follow October 5.

A cellist himself, Yun’s fascinating, highly autobiographical Concerto for Violoncello and Orchestra (1975/76) anchors the album, bursting with passion, despair, and new timbral textures bridging Schoenbergian serialism and indeterminate pitch worlds, with radically precise technical demands. The work also integrates the sonic world of Asian instruments and forms, such as the use of a plectrum to emulate the Korean zither, the kŏmun’go. Cellist Matt Haimovitzhad not come across Isang Yun’s work, nor heard of his harrowing personal narrative, until recently: “I tapped into every aspect of my musical toolbox as I approached what at first glance appeared impossible. At the end of my solitary work was confirmation of the rich treasure I had in my possession. Isang Yun’s Cello Concerto deserves to stand alongside Lutoslawski’s and Dutilleux’s in the pantheon of the genre’s late 20th century innovations.” Haimovitz performed Yun’s “Glissées for Solo Cello” (1970), also heard on Sunrise Falling,at the Isang Yun Haus in Berlin on September 17, which would have been the composer’s 101st birthday, and will perform music by Yun at selected upcoming performances in Moscow, Washington, DC, Boston, New York, and elsewhere this fall.

“A composer cannot view the world in which he lives with indifference. Human suffering, oppression, injustice … Where there is pain, where there is injustice, I want to have my say through my music.”– Isang Yun, 1983

Yun’s Concerto for Violin and Orchestra No.1(1981) features violinistYumi Hwang-Williams, who reflects upon her own emotional return to Korea in 2015, where she performed the concerto at the Tongyeong International Music Festival held in honor of Isang Yun. Hwang-Williams also performs the wonderfully imaginative Kontraste. Two Pieces for Solo Violin (1987), and Gasa for Violin and Piano (1963), with Dennis Russell Davies at the piano. The double album also includes the orchestralFanfare & Memorial, and the intricate solo piano work, Interludium A(1982)– the note A also being an important reference point in the cello concerto and other works by Yun – performed by pianist Maki Namekawa.

Today, one hundred years after Isang Yun’s birth, the two Koreas still teeter on a razor’s edge, with ever more global ramifications. As unlocked and performed by these extraordinary artists, this music opens the gate to a lost, united land, with Yun’s own heart bleeding, but ever hopeful.

MATT HAIMOVITZ is praised by The New York Times as a “ferociously talented cellist who brings his megawatt sound and uncommon expressive gifts to a vast variety of styles.” Along with his performances around the world, he currently holds positions at the Schulich School of Music in Montreal and as the first John Cage fellow at The New School’s Mannes School of Music. Haimovitz’s recent recordings include an album solo cello music by Philip Glass, on the Orange Mountain Music label, and, for the PENTATONE Oxingale series, TROIKA, music of the Slavic soul; The Cello Suites According to Anna Magdalenaand its companion album, Overtures to Bach; among others.

DENNIS RUSSELL DAVIES is known for his extraordinary range of repertoire, technical brilliance and fearless music-making. An esteemed presence consistently at the forefront of both orchestral and operatic worlds, Davies is also an accomplished pianist.2018 marks 49 seasons that Davies has held music directorships of prestigious international orchestras, while frequently guest conducting with major orchestras and opera companies worldwide. Davis is Music Director and Chief Conductor of the BRUCKNER ORCHESTER LINZ, one of the leading orchestras of Central Europe, and was recently appointed Chief Conductor and Artistic Director of the Filharmonie Brno.

YUMI HWANG-WILLIAMSis an American violinist of exceptional musicianship, recognized both for her stylish performances of the classics and her commitment to the works of present-day composers. Stringscalls her “a modern Prometheus” who has “emerged as a fiery champion of contemporary classical music.” Hwang-Williams recently celebrated Leonard Bernstein’s 100th by performing Serenade with the Colorado Symphony (Denver), where she has been Concertmaster since 2000.

A leading figure among today’s pianists, MAKI NAMEKAWA is equally at home in classical music and the repertoire of our time. Namekawa records and performs frequently for major radio networks in Germany, the Netherlands, Switzerland, and France. In 2013, she performed the world premiere of the entire cycle of Philip Glass’ 20 Études for Solo Pianoat Perth International Arts Festival under the participation of Glass himself, followed by concerts around the world. A best-selling double-CD of the complete Glass etudes was released by Orange Mountain Music in 2014.